When I Survey the Wondrous Cross I See Hope

As we once again turn our attention to Luke 23 I would like to share with you what else I see when “I Survey the Wondrous Cross.” As Christ’s friends and family were watching Him die on Golgatha’s hill, they must have felt hopeless. However, we can look at the same horrific scene and realize that what happened that day brought the world HOPE!
Please take a moment to read Luke 23:38-43.

While hanging on the cross a conversation began between Jesus and the two criminals that had been crucified on either side of Him. It is obvious they had both heard of Jesus and had heard stories about who He claimed to be. We are not sure how they learned about Him, or even if what they heard was accurate. Some of the Gospel writers revealed that at the beginning, both of the criminals had mocked Jesus, but it is obvious that one of them had been touched by the Holy Spirit through something he had seen Jesus do, or perhaps he had heard Jesus say, “Father forgive them for they know not what they do.” 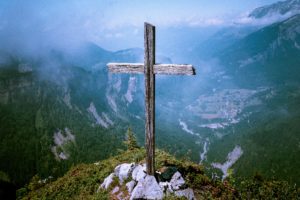 Regardless of what transpired, these two criminals ended up with very different responses to the Christ they were dying beside. One wanted Jesus to set him free from his pain and agony by delivering him off the cross and the other wanted to be free by becoming a part of Christ’s kingdom. He came to the realization of WHO Jesus was and simply requested for Jesus to remember him when He entered into His kingdom. He understood that Jesus is the Messiah and he understood that He truly was the King and he wanted to be a part of Jesus’ kingdom.

When I Survey the Wondrous Cross I am filled with HOPE! That dying man had HOPE that day because He trusted in the ONLY one who could give him real, lasting hope!